Named after the gentle trade winds that sweep the French Caribbean Islands, Alizé at the Top of the Palms features world-class cuisine, service and wine list, boasting the most dramatic view of the famous Las Vegas Strip. Chef and Proprietor André Rochat of the respected and award winning Andre’s Restaurant, opened Alizé – the crown jewel of his culinary empire in 2001 on the top floor of the Palms Casino Resort. Alizé is the talk of the town with gained notoriety and accolades in numerous magazines around the world including being named by Condé Nast Traveler as one of the top new restaurants in the world. 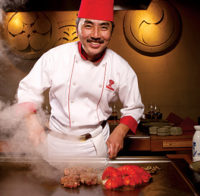