It might be safe to say that Caesars Palace is synonymous with Las Vegas. Its lavish rooms, splendorous pools, world-class shopping, extravagant entertainment, gourmet dining and hot nightlife continue to define just what “doing Vegas” is all about.

Unlike many of its contemporaries that have been imploded into dust over the years — Caesars Palace opened in 1966 — the resort continues to innovate and reinvent itself without sacrificing that classic Rome-via-Vegas atmosphere: unparalleled service, majestic surroundings and a true circus maximus of diversions.

Where should one even begin? That’s easy…with the stellar entertainment. Continuing to raise the bar for shows in Vegas, Caesars Palace offers incredible headliner productions — starring Celine Dion, Elton John, Rod Stewart, Mariah Carey and Reba with Brooks & Dunn and several other music and comedy legends — in its voluminous show venue the Colosseum. An edgy, circus-style show for adults, “Absinthe” has also pitched its tent-style theater in front of the Roman Empire.

There are several cool bars to chill out in at the resort. Cleopatra’s Barge, the luxurious floating lounge, transports you back to the time of Julius Caesar. The Seahorse Lounge houses a 1,700-gallon aquarium filled with Australian pot belly seahorses at its entrance. A bar and lounge called Fizz Las Vegas serves high-end champagnes by the glass or bottle along with exquisite choices of caviar, charcuterie and small plates. Vista Cocktail Lounge combines custom-crafted cocktails along with LED portals that showcase panoramic views from around the world.

Boasting an ornately designed domed four-story roof, the luxurious Omnia Nightclub houses a seductive ultra lounge, a high-energy main room with one of the largest dance floors in Vegas, a mezzanine with private booths and a breathtaking rooftop garden. There’s also an impressive roster of DJs spinning here.

The ever-growing list of amazing dining options — in both the casino and the renowned shopping mecca that is the The Forum Shops at Caesars — features celebrity chefs like Bobby Flay with his Southwestern fare at Mesa Grill, Michel Richard of Central and Guy Savoy. Guests can also enjoy rare delights from the likes of Sushi Roku or for less adventurous palettes, there are comfort-food options like The Cheesecake Factory. The Old Homestead Steakhouse, a venerable New York City steakhouse, serves up its iconic cuts of meat and classic sides at the resort. The Gordon Ramsay Pub & Grill offers an array of British-oriented food from lamb T-bone to fish and chips as well as have a striking bar with 36 beers on tap and 24 bottled beers. Searsucker is known for its cowboy attitude and signature items such as the 38-ounce bone-in ribeye tomahawk. The Bacchanal Buffet is a 25,000-square-foot homage to eating.

Of course, before high-class shopping and gourmet restaurants, Caesars Palace was known as the casino in Las Vegas for anyone who is anyone to throw around their cash. And the 129,000-square-foot casino continues to be a prime destination for high rollers, celebrities and those looking to become either of the two. Excitement is always on tap in 62-table poker room and throughout the fast-paced race and sports book.

Even mere mortals can experience service and amenities worthy of the Olympian gods, from the artisan-like hair, skin and nail treatments available at Color salon run by Michael Boychuck to the 55,000-square-foot Qua Baths & Spa, which is known for its signature Roman bath rituals.

Caesars Palace boasts five room towers. The spacious rooms in its Augustus and Octavius towers are known as The Laurel Collection. They provide an elevated guest experience with added luxuries like a unique hotel app, a dedicated service staff and direct access to the Garden of the Gods pool oasis.

The world’s first Nobu Hotel has also opened inside the resort. Created by celebrity chef Nobu Matsuhisa, the 181-room boutique property offers a distinctly Japanese experience in the heart of the Las Vegas Strip. On the ground floor of Caesars Palace, it boasts the world’s largest Nobu Restaurant and Lounge, at 12,775 square feet. In addition to a sushi bar, private dining areas, an open kitchen and two chef’s tables, this is the only Nobu restaurant in the world to have three sizzling teppanyaki tables.

If you crave the maximum Vegas experience, there simply is no argument more compelling than one night’s stay at Caesars Palace. Don’t take our word for it. See for yourself. 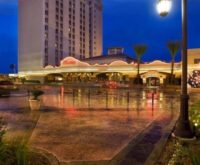